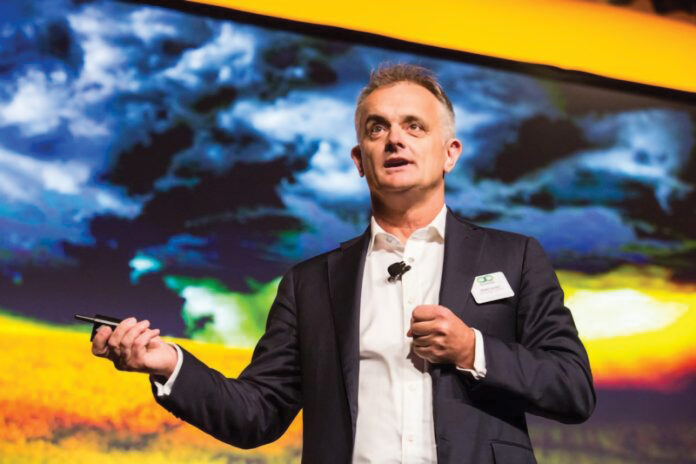 Optometry was not a well-known profession when Peter Larsen (OM 1981) made the choice to pursue this career. In fact, it was the example set by his father that inspired Peter to move into the work he does today.

“My father was an optometrist. He had a small business and there was always a story about the people he’d helped,” Peter says. “That’s what prompted me to move into that career.” Today, Peter is the Group Eye Health Strategy Director of Specsavers, with responsibility across the multinational business. He was a founding Director of Specsavers Australia and New Zealand (ANZ) 12 years ago which now holds over 40 per cent of the local eye market.

Serving as the Specsavers ANZ Optometry Director until recently, Peter brought about changes that are saving the sight of thousands of people. Having been at the vanguard of    a value disruptive retail play within the ANZ region, a natural evolvement was to seek to positively disrupt the primary care role of the optometrist. “In the last year, an additional 20,000 people in Australia were diagnosed with glaucoma through the work we’re doing, thereby enabling treatment and preventing irreversible loss of sight,” he says. “We’re able to make this impact through systematic utilisation of imaging technology, benchmarking of individual performance and formalised collaborative training with Ophthalmology.”

“At Specsavers Australia, we are now positively impacting the detection of glaucoma more sensitively than any other optical group in the world,” Peter adds. “Not only that, but we’re sharing information about how we do this and working with the Royal College of Ophthalmology and other bodies to promulgate our work more broadly across the profession. The project I led has been a cross-functional activity involving over 2000 people, and it’s something of which I’m very proud.”

According to Peter, the practice of optometry hasn’t always had the status it holds today. “Like many other paramedical professions, optometry has grown up over the past few decades,” he explains. “I think it’s important that any profession that’s seeking to develop is ambitious, as well as aware of its scope. You can’t move forward unless you have strong foundations.”

Peter sees championing transparency as another key aspect of his role. “Companies need to deliver positive impacts in an increasingly transparent way – that’s my remit,” he says. “Sometimes that’s uncomfortable, but we have to confront and demonstrate the value that we deliver for the people who walk into our premises, who are being promised a service.”

The recently announced ‘Keepsight’ initiative, a national diabetic eye testing scheme, is the next big project. “Our outcome focus, scale and systematic platform has provided the opportunity to participate in a more significant social impact intervention. Specsavers’ mission, over the next five years, is to eradicate blindness due to diabetes,” explains Peter. “We are talking about 100,000 people that we need to help and it is going to take everyone, government and all sectors in the industry, to resolve transparently. We will be at the forefront of this change.”

Reflecting on how his time at Melbourne Grammar School influences him today, Peter highlights the importance of working alongside others for a mutual goal. “I loved being on sporting teams when I was at school,” he says.  “Working with a team and being with people you trusted was something I really enjoyed. It’s about enabling the people within the team to make their own contribution to success and that is what I   like to think I’m continuing to do.”