Regular Chapel services have been a part of Melbourne Grammar School life since its beginning in 1858. The first hint of dedicated Chapel Choir occurs in The Melburnian in 1886:

…In conclusion, we may refer to the successful institution of the Choral Society, which, although yet in its infancy, promises to form the nucleus of a very good School choir for the Chapel…

It was certainly well established by 1893 when it performed at the dedication of the School Chapel (known as the Chapel of St Peter from 1943), singing the 24th Psalm as they processed into the Chapel, together with the School Council, the Bishops of Melbourne, Ballarat and Riverina and their chaplains, and other clergy. The Chapel Choir sang The Church’s One Foundation during the Divine Service.

In addition to singing at weekly Choral Eucharist, annual Confirmation and Carol services, weddings and other liturgical and ceremonial events, the Choir has lent its voices to several notable occasions including:

Organised on cathedral lines, choir numbers tended to vary from around 20 – 30 members. In its early years, Old Melburnians were part of the ranks of the Choir, a tradition that continued until 1954 at which time sufficient talent was able to be drawn from the cohort of boys attending the School.

Student leadership amongst the ranks comes from the Senior Choristers, who are elected by their peers in recognition of their talent and dedication to the Choir. You can meet two former Senior Choristers who are now professional singers – Timothy Reynolds (OM 2001) and Max Riebl (OM 2009) – here.

A chorister in the 1910s, Sir William Neil McKie MVO (OM 1918) learnt to play the organ while at Melbourne Grammar. He went on to become Organist and Master of the Choristers at Westminster Abbey, where he was responsible for the music at three Royal Weddings, including that of Princess Elizabeth and the Duke of Edinburgh. He was also in charge of the music at the Queen’s Coronation in 1953.

The blackwood choir stalls were installed in the Chapel of St Peter in January 1901 and these, of course, have been the Choir’s ‘home’ with one period of exception. The Choir moved to the Chapel of St Andrew at Grimwade House in 1942 while US military personnel occupied the South Yarra campus.

Choir members wore cassocks and surplices for the first time in 1894.

Of the thirteen Choirmasters who have led the Chapel Choir over the years, perhaps the most notable is Donald Britton who led the group from 1954 until his retirement in 1974. He is remembered for his role in building the music program at Melbourne Grammar from a low point to a sophisticated, multi-faceted set of activities.

The Chapel Choir is now firmly embedded in the fabric of the School. Typically comprising around 35 boys drawn from Years 5 – 12, students audition to be part of the ensemble and work exceedingly hard once part of it.

Led by Mr Philip Carmody, the Chapel Choir performs at a range of services and Eucharists each year, as well as stepping outside the Bluestone to sing with other elite groups, such as the Trinity College Choir on a regular basis.

You can read more about the shaping of the Melbourne Grammar School Chapel Choir and its role here. Listen to the Chapel Choir 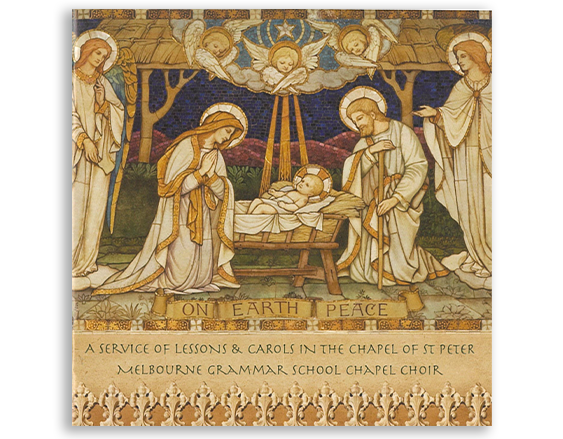 From the School Archives

The music collection includes recordings of the School Choir, School concerts, festivals, musicals and the Thanksgiving Service in St. Paul’s Cathedral held in 1958 for the Melbourne Grammar Centenary). Many of these recordings have now been converted to digital format for long term preservation purposes.