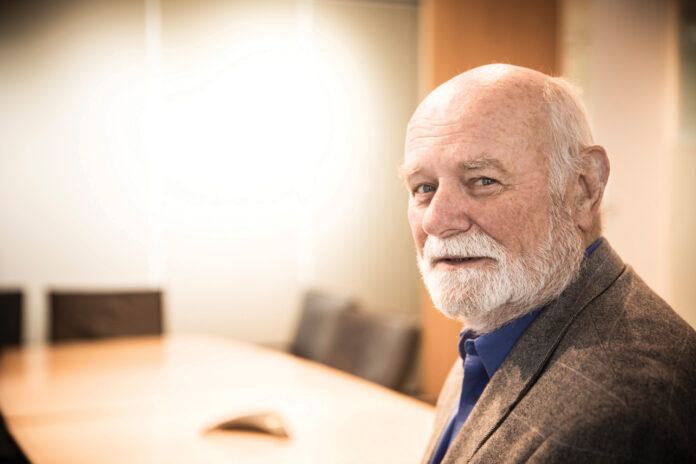 Emeritus Professor Bob Officer AM (OM 1957) could have chosen to focus solely on the world within university walls. One of Australia’s pre-eminent financial economists, his outstanding academic career spans roles at the University of Queensland, Monash University and the University of Melbourne. But for this self-described “practical economist,” a detached approach runs counter to his personal philosophy.

“I think academics have a duty to the broader community,” says Professor Officer. “If you’re an expert in a particular area, I think you have a responsibility to take that expertise and apply it in the wider world.”

Professor Officer is modest in describing his expertise, but the fact remains that his work continues to affect the way Australia’s economy operates. In the late 1980s, for example, he was part of a team that thoroughly considered how companies should behave under the newly introduced imputation system of dividend taxation. His conclusions are part of the reason Australian companies are motivated to raise capital from shareholders rather than borrow funds.

More broadly, the financial models he has contributed to are still relied on by organisations such as the ACCC, and his advice is regularly sought by commercial companies, financial institutions, government organisations, not for profits and others. Professor Officer has held senior roles on the Boards of many of these organisations.

“Quite frankly I think my biggest pride is the cup I got for second Best and Fairest for the team I played for in a Victorian Country Football League,” Professor Officer says. “But I do have a reputation for being a financial/economic modelling expert. Nonetheless, I used to start every new university class by emphasising that we can’t be religious in our trust of models. I told my students: ‘Don’t think a model is going to carry you through life or make you millions on the stock exchange. Life is more complicated than that.’ Even today, I spend a lot of time pointing out the problem of relying too much on models to the people I work with.”

Professor Officer is just as unassuming when describing his “serendipitous” educational path. An early interest in agriculture led to a placement in rural western Victoria, where, in Professor Officer’s words, “social life was zero”. With time on his hands, he took the opportunity to educate himself on an entirely new subject.

“I got sick of reading novels, so I thought I might as well read some of the economic texts I had at hand,” he explains. “That led to studying at the University of New England, where I was lucky enough to have some very good professors who were American-trained. One connection there got me a scholarship at the University of Chicago where I had the opportunity to work on practical projects. That had a strong influence on the way my career unfolded.”

A boarder during his time at Melbourne Grammar, Professor Officer is still connected to the School through his great nephew, Year 5 student, William Officer, his attendance at reunion events, and quarterly gatherings with a group of fellow Old Melburnians. Remembering his school days, he returns to a moment that underscored the importance of independent thought and practical action.

“While I was there I was a great admirer of our Headmaster, Sir Brian Hone,” Professor Officer says. “I can remember complaining to him about a particular class. He said to me: ‘Ah, young man, you’ll turn out to be your own best teacher.’”