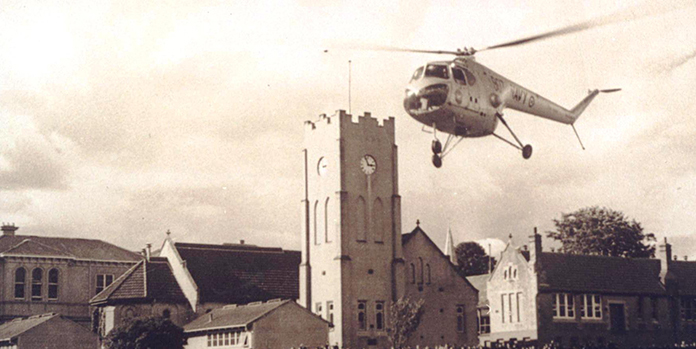 At around 7.30am on Wednesday 5 May 2021, a hot air balloon made a safe but unexpected landing on Wadhurst Oval. The commercial flight experienced a sudden drop in the prevailing wind and was unable to complete its intended journey to South Melbourne.

The School was in a period of off-campus learning at the time, so there were no students on campus to witness the event, probably to their chagrin. The balloon was eventually packed up and it, together with its passengers, departed the School grounds within the hour.

This was not the first time a hot air balloon has availed itself of the School grounds when in need of an emergency stop. However, in relation to planned visits, helicopters landing on Wadhurst Oval are more frequent.

On Friday 8 October 1948, the School’s Gala Day, a RAAF Sikorsky helicopter visited the School to take the Lord Mayor of Melbourne on a flight over the city. WWII veteran, Flight Lieutenant John Archer (OM 1941) was a member of the flight crew. There are contradictory reports in The Melburnian about whether or not the Headmaster, Joseph Sutcliffe, also went on the flight.

A few minutes before the curious looking plane made its appearance, the oval was surrounded by a great ring of upturned faces eagerly scanning the sky. To the great delight of the boys, the pilot put his craft through its paces prior to landing. Its incredible antics caused gasps of astonishment to echo around the ground. Finally, after circling the School several times at tree-top level, the plane alighted with the grace of a feather.

Members of the Camera Club were out in full force to record the event with Arthur Meredith-Smith (OM 1952) winning the first prize of five shillings (equivalent to approximately $16 today) for the best photo taken on the day.

At least one class – Mr Allen (Hippo) Kelso’s 3B – was asked to write an account of its landing and visit to the School. Tony Graham (OM 1954) won the prize for the best essay and was awarded a photo of the landing which had been taken by Mr Kelso (MGS staff 1947 – 1991).

Members of the press and three professional movie-makers were also present. Students reported seeing the episode at a city theatrette later that week.

On Wednesday 3 November 1954, a naval Bristol helicopter from HMAS Sydney visited both the South Yarra and Grimwade House campuses, as part of the Navy Week Celebrations.

The helicopter performed aerobatics then lowered a crew member as it hovered over each of the Wadhurst and Grimwade House ovals, with the remaining crew members demonstrating the technique of rescuing people from the sea.

In 1958 a helicopter also landed on the Wadhurst Oval as part of the Centenary Celebrations.

On Tuesday 3 June 1997 an army helicopter arrived in spectacular fashion on the main School oval. A senior Army officer emerged from the vehicle to present two Year 12 students – David Goodwin (OM 1997) and David Barton (OM 1997) – with Australian Defence Force Academy (ADFA) Scholarships. Both students had been prominent Cadets during their time at the School and were two of only 80 Australian Year 12 students to receive scholarships that year.

Do you know anything more?

Can you provide any further information about these visits, or other aircraft landings at Melbourne Grammar School? Do you have photos of the events you are willing to share?
If so, we would like to hear from you. 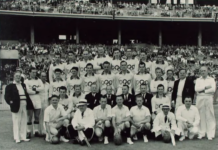 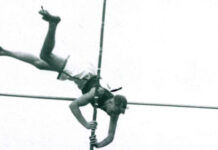