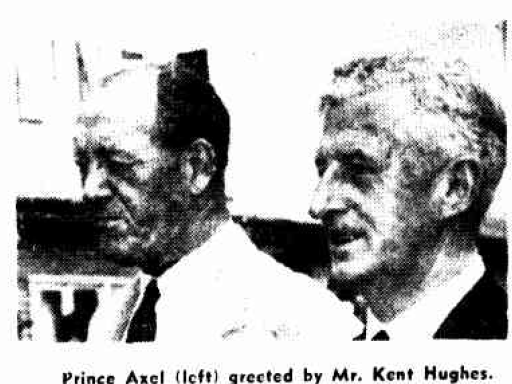 The Committee oversaw an £8 million budget to cover every aspect of running the Games, from  ticket sales to language interpreters, catering and construction.

Read the Official Report of The Organising Committee for the Games of the XVI Olympiad Melbourne 1956, which details the contribution of our Old Melburnians and many other facets of the Games, here.

Dux and School Captain in his final year, Wilfred Kent Hughes was also champion athlete, Captain of the First XVIII, a member of the First XI and a lieutenant in the cadet corps. After leaving school, he was named Victoria’s Rhodes Scholar for 1915, was recognised for distinguished service during WWI with the Military Cross, and graduated from Oxford University.

Hughes was an Olympian himself, having competed as a hurdler in the 1920 Games and, in 1922, becoming the British 400-metre hurdles champion.

His service to the 1956 Melbourne Games was recognised when Hughes was knighted in the 1957 New Year’s honours. Reflecting on the Games, Hughes emphasised their ability to unite people around a common goal. “An atmosphere of sportsmanship and goodwill, which seemed to lift the Olympic ideals to even greater heights than ever before, was manifest at the Melbourne Games,” he wrote. (The Official Report of The Organising Committee for the Games of the XVI Olympiad Melbourne 1956, p. 16)

“Wilfred Kent Hughes has achieved considerable success as a soldier, politician and Olympic sportsman, but as chairman of the Olympic Organising Committee he has probably had his greatest headaches. … As a member of the Australian 1920 Olympic team as a hurdler, Billy Kent Hughes was used to leaping fences – and he needed all that skill to surmount the obstacles he has faced … His swift verbal battles in committee have at time knocked spots off the ceiling, but the work carried on.”

After the Games, Hughes continued his involvement in sports administration, including roles in skiing and athletics, and as Chef de Mission of the Commonwealth Games team in 1962.

Lewis Luxton succeeded his father Sir Harold Luxton (OM 1906) on the International Olympic Committee (IOC) in 1951. Luxton’s term on the IOC (1951–74) is one of the organisation’s longest, and the role meant he was automatically a member of the Melbourne Games Committee.

His connection to the Games had begun years earlier, when he rowed for Britain at the 1932 Los Angeles Olympics, where he placed fourth. At the 1968 Mexico Games, Luxton had the privilege of presenting Ralph Doubell’s Gold Medal for the 800m. But perhaps his most significant Olympic moment came in 1980, when he cast the deciding vote as to whether or not the Australian Team would participate in the 1980 Moscow Games. The vote was 6 – 5 in favour.

Luxton continued a strong connection to Melbourne Grammar throughout his life, serving as President of the Old Melburnians Council in 1963-64, along with many years on the School Council. In 1982, the School named a boat in his Honour, and the Luxton Dining Room at our South Yarra campus also carries his name.

In his role as a member of the 1956 Committee, Bill Williams was continuing a commitment to sport. While working on the Games, he was also a leading member of the Old Melburnians Athletics Club, and served on the Victorian Amateur Athletics Federation and the Australian Olympic Federation.

While at Melbourne Grammar, Williams was active in athletics and rowing, joining the 2nd VIII in 1945. Well after leaving school, he continued his commitment to Melbourne Grammar through generous donations towards a variety of areas.