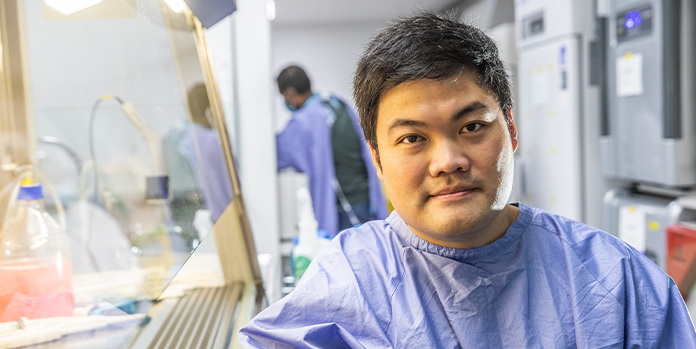 As cofounder and CEO of a biotech start-up, Hon Weng Chong (OM 2006) puts one question at the centre of everything he does: What is possible?

“Curiosity is one of the main things that drives me,” says Hon, who began a career in medicine before time in Silicon Valley ultimately set him on a path to found Melbourne-based start-up Cortical Labs. “For me, it’s very fulfilling to take an idea and see just how far we can go with it.”

A mind-bending project with massive scope

Hon sums up Cortical Labs’ ambitious project in just a few words: “Fundamentally, we’re replicating a brain that can learn in a dish.”

“What we’re aiming to create is a cluster of neurones with an embedded silicon chip — essentially a mini-brain — that can not only perform tasks, but learn how to perform new tasks over time,” he explains. “We tell the brain what we want it to do or learn through the chip, and the brain ‘talks back to us’ through the chip as well. It becomes a closed circuit in which learning can occur.”

“Humans can do this naturally, of course. We are born with the ability to learn. We don’t think about it. We just do it. We’re able to take on new information and adapt our behaviour based on what we know,” says Hon. “But artificial intelligence software has difficulty here. Training it to learn even the basic things we take for granted, like voice or image recognition, requires a huge amount of data input and energy.”

To test the success of their approach, Cortical Labs turned to a classic piece of software: the tennis-like computer game ‘Pong’.

“We decided to use Pong to see whether the neurones would be able to improve as they played the game,” Hon says. “We’ve been able to show that with the right stimulus, they can actually get better at it. They’re learning as they play.”

Risk, reward and an open mind

Hon sees applications for Cortical Labs’ work across a wide range of fields, from the medical world, where this technology could be used to test the effectiveness of new treatments on our brain cells created using our own stem cells, to robotics and cybersecurity.

“It’s very important to me that this technology helps people,” he says. “There’s a risk that it will fail, but that doesn’t really bother me. It’s the trade off of risk versus reward. I’m searching for something that will have the greatest impact on our lives.”

Hon already has a successful project behind him, having created the digital stethoscope ‘StethoCloud’ while still training to be a medical doctor.

“I wasn’t born an entrepreneur,” he says. “I think one of the most important subjects I did at Melbourne Grammar was Design Technology, because it taught us how to think, prototype, test, fail, and try again. This is really important in a world where we don’t always know what we’re looking for—where we need to figure the answers out iteratively.”

“The biggest thing I’ve learned in my career so far is to keep an open mind,” Hon adds. “That is an important message for current students as well. Who knows? Maybe the next technological breakthrough could be built by a Melbourne Grammar student.”