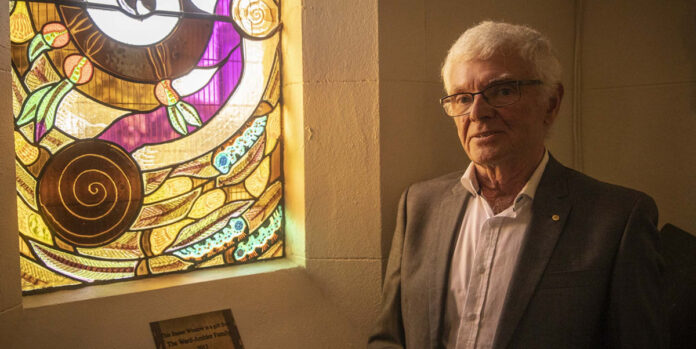 Life is “very delightfully busy” for Mr David Wright OAM (OM 1966). At 73, he is still fulfilling commissions for his signature glass artworks, for which he has gained an outstanding international reputation over his 50-year career.

“Being an artist means you can practice for life,” David says. “The challenge is always there. Every time you stare at a blank piece of paper there’s that question: ‘What are you going to make of this?’”

David’s path to becoming a glass artist began in the unlikely area of set design. While studying at Melbourne Grammar he built his first stained-glass windows from cardboard and cellophane for the School production of ‘A Man for All Seasons’. The 1965 Melburnian went on to describe the props as ones that “any professional production would be delighted to have”. David later went on to reproduce one of the windows using glass with support from his art teacher, Mr Ronald Millar.

“I submitted that window as my matriculation art project, but the examiners rejected it,” David says. “They told me they’d never received anything like it, and that I would have to photograph and resubmit the work on paper.”

Neither those examiners nor David himself expected the career path that followed. “My wife thought she was marrying an architect, but the glass took over more and more,” he says. “It gradually turned into my full-time profession.”

As his skills progressed, David developed techniques of casting glass on moulds and fusing it in kilns to create particular colours and textures—new techniques that have since been adopted by glass artists around the world. “The work of experimenting and tracing back to find out why something went wrong appealed to the scientific side of my brain,” he says.

Today, David’s body of work includes windows for institutions as diverse as Parliament House, Sydney’s St James Church, and Melbourne’s Temple Beth Israel Synagogue and Cabrini Hospital, as well as the Melbourne Zoo. Grimwade House’s Chapel of St Andrew is also home to five of David’s works depicting moments in the life of Jesus, plus another called ‘The Ruth Window’.

In each new environment, David considers the need for his work to respond to the conditions of the space itself.

“It’s that combination between technique and design,” David explains. “Sometimes you need to develop techniques that will create a particular design, or the design might be suggested by the technique itself. There’s a constant relationship between the two.”

The Australian landscape, flora and fauna are constant themes for David, as is a sense of the spiritual in the everyday.

“Spirituality isn’t an academic thing or historical document, but something that’s with us all the time,” David says. “I hope the work expresses that immediacy of the spiritual in everything we do.”