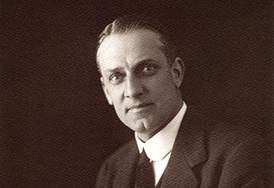 Anyone who has been to Edwin Flack Park will remember the bronze statue of Australia’s first Olympic champion. Edwin Flack (OM 1890) was the sole Australian representative at the 1896 Athens Games – the first of the modern Olympics.

Despite having only ever run a maximum distance of 16 km before his Olympic performance, Flack also took on the marathon. Running in oppressive heat, by the 30 km mark Flack had overtaken everyone and led the race, before being passed by a Greek runner.

Flack finally collapsed at the 34 km mark and was taken by ambulance to the stadium to watch his fellow competitors cross the line. The Athenians dubbed him “The Lion of Athens” for this courageous performance.

Incredibly, Flack also found the energy to compete in the singles and doubles tennis during these Games. He won a bronze medal in the doubles event.

As the Australian colonies had not yet federated at the time of the Games, there was no national uniform or anthem, so Flack competed in his Old Melburnian athletics singlet.

Because there were no gold medals at the 1896 Games, Flack received two painted commemorative medals, two crowns of olive branches—which he later presented to Melbourne Grammar—and two certificates.

Well before his Olympic performance, in 1892 Flack founded the Melbourne Hare and Hounds Club—the precursor to the Old Melburnians Athletics Club. In 1895 the Club presented Flack with a carriage clock, immediately prior to his overseas departure to gain work experience and to compete in the Olympic Games. Family friend, Mrs Jessica Carvell, generously donated the clock to the School in 2017.

Like so many Australian Olympians after him, Flack balanced his passion for sport with career commitments. He began by working with his father in the accountancy firm Davey, Flack & Co, and in 1895 went to London to work with Price, Waterhouse & Co (PwC).

After returning to Melbourne in 1899, he established the Flack & Flack accounting firm with his father, which expanded to branches in Sydney, Brisbane, Adelaide, Perth, Auckland and Wellington. This firm later merged with accounting firm PwC.

Flack also became a director of several companies, bred cattle at his farm near Berwick, and served on the committee of management of the Alfred Hospital from 1918 to 1935.

Many students have benefited from his philanthropy. After he died in 1935, Flack bequeathed a portion of his large estate to Melbourne Grammar School. Today, the EH Flack Scholarship recognises boarding students who show strong intellectual aptitude, leadership, and involvement with the School beyond their academic commitments.

“I got up about nine and loafed about all the morning until about 12.30 when I made preparations for starting. The Frenchman went off at a good pace and soon established a long lead. I kept back for the first few miles and then set off after him. The 1st 20 kilos is uphill. At the half distance I was 2nd and the Frenchman was 3 minutes. I caught him at the 30 kilos … I began to feel that I should not be able to go the full distance and about 6 kilos from Athens I had to give up as I was quite knocked up and felt very bad. Just as I was giving in the Greek who won came past me looking very fresh and running strongly. I then drove to the Stadion and was very much impressed with the sight of it as it was packed with people. All along the road for the last 10 kilos was crowded with people and their excitement was intense. I was very glad to lie down for some time after I got in … The race was a very hard one and I never wish to attempt it again.”